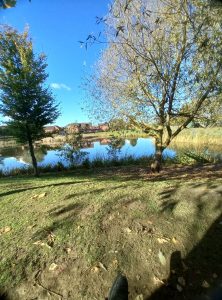 Unusually still today – but beautiful none the less. 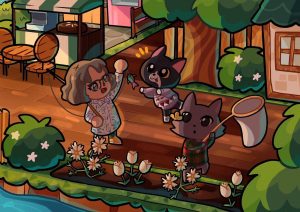 Toby is wearing the McDuff tartan.

Nobody is really clear which direction this is going in, but they are clear about the two big variables that could change that.

One is waning immunity, so if immunity wanes faster than expected, you’ll see a bigger increase, and that’s why it’s so important to get booster shots going in the vulnerable and the elderly in particular.

So the high level remains a concern and from a high level you can go up quite quickly.

In a separate appearance on Sky News, he said:

I think the vaccines have made an absolutely massive difference and now we also have antiviral medicines coming along. We’ve definitely got the armamentarium we need to tackle this now. Keeping immunity high is really, really important.

We’re a bit uncertain as to which direction the levels go at at the moment, so I think we’ve got a pretty difficult winter ahead of us.

Wondering if I am really going to use this site.

Could still be used for notes on translations, reflections, etc.

Ionos have increased the monthly charge to £12.

At SCVS pizza lunch in Queenborough. Louise and the group.

I got the MIDI connector fitted up correctly. Can transcribe piano.

I am going to keep a small diary. For everyday things.

Like the car being out of service – it may need a new gearbox, and that’s likely to be expensive.

What do you do without a car? Use cabs. Use home delivery. Get a new car.

I have a mild toothache. Stress-related. Work on reducing stress. Gentle exercise.

The cats are getting old. They are still quite active and lively, though they also sleep a lot. Katy has matted fur on her back.

I haven’t done any music for a while. Maybe work on chords with Chordify?

What was this duple vision of Mahler’s? A vision of his world, crumbling in corruption beneath its smug surface, fulsome, hypocritical, prosperous, sure of its terrestrial immortality, yet bereft of its faith in spiritual immortality. The music is almost cruel in its revelations: it is like a camera that has caught Western society in the moment of its incipient decay. But to Mahler’s own audiences none of this was apparent: they refused (or were unable) to see themselves mirrored in these grotesque symphonies.

This dual vision of Mahler’s, which tore him apart all his life, is the vision we have finally come to perceive in his music. This is what Mahler meant when he said, “My time will come.” It is only after fifty, sixty, seventy years of world holocausts, of the simultaneous advance of democracy with our increasing inability to stop making war, of the simultaneous magnification of national pieties with intensification of our active resistance to social equality – only after we have experienced all this through the smoking ovens of Auschwitz, the frantically bombed jungles of Vietnam, through Hungary, Suez, the Bay of Pigs, the farce-trial of Sinyavsky and Daniel, the refueling of the Nazi machine, the murder in Dallas, the arrogance of South Africa, the Hiss-Chambers travesty, the Trotzkyite purges, Black Power, Red Guards, the Arab encirclement of Israel, the plague of McCarthyism, the Tweedledum armament race – only after all this can we finally listen to Mahler’s music and understand that it foretold all. And in the foretelling it showered a rain of beauty on this world that has not been equaled since.

Never mind that Rhapsody in Blue was scored (not by Gershwin but by Ferde Grofé) to show off the distinctive talents of a “jazz” band that is dead and gone. Classical musicians feel obliged to replicate the sound of the original—an exercise in channeling, not interpretation. Yes, the Chicago Symphony can do an amazingly good imitation of Paul Whiteman’s band, but why bother?